4 out of 5 Dreamers recommend DBLL

Halifax is a city on the Eastern shore of Canada.  The Mi’qmaq people who lived there originally called the place “Jipugtug” (“The Biggest Harbour”).  The city was built beside one of the deepest harbours in the world, and this harbour has become integral to the way of life of the people who have lived here and continue to live here ever since.

Naturally then, if you were going to take a tour of a city that depends so much on a harbour, you would need to explore that harbour.  But how can this be done efficiently in one tour?  Enter the Lark V amphibious vehicle.

You’ll feel like James Bond in The Spy Who Loved Me when you take the Harbour Hopper Tour.

Originally built as a U.S. transport vehicle for the Vietnam War, the Lark V cost roughly $1 Million to develop and is capable of transporting large groups of people on land or in water.  It’s the perfect solution!

Of course, what makes this tour special is the fact that you can drive from the land into the water, and then back out again.  Pleasantly though, the tour is also narrated by a young, energetic guide who shares quite fascinating and insightful stories about the history of various places and buildings around downtown Halifax. 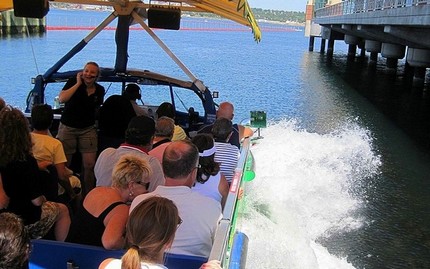 One of the most surreal, “this shouldn’t be happening” experiences you’ll likely ever have.

If you are in Halifax, make sure you check out the Harbour Hopper Tour.  You will be informed, you will have a great time, and you will never forget it!